What is the Purpose of Guard Rails? 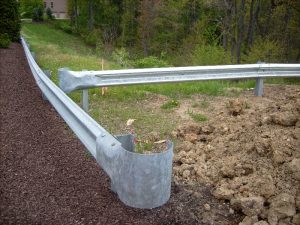 Guard rails and their ability to protect against the range of situations motorists can end up in will depend on several factors. Guardrail performance can be affected by the size and speed of the vehicle as well as the vehicle’s orientation when it hits the guard rail.

When Should a Guard Rail Be Installed?

The guard rail is meant to prevent the motorist from hitting objects such as utility poles, trees, retaining walls, or other objects that are not feasible to remove from the side of the road. A guard also helps to prevent motorists from becoming stuck on a steep embankment or side slope surrounding the road.

In many cases, it is safer for the motorist to collide with a guardrail rather than striking objects such as a tree or utility pole. If the consequences of hitting the guard rail are less severe than hitting the retaining wall or trees that lay beyond the guard rail, then it is best to have a guide rail installed in that part of the roadway.

How a Guard Rail System Works

Guard rails function as a complete system that includes a variety of components including:
Each of these components works together to handle the impact of a vehicle. The two key elements of a guard rail include the end terminal and the guard rail face:

Need a Guard Rail Installed? We Can Help!

At Fence By Maintenance Service, we have extensive experience as guide rail installers in Pittsburgh. With a highly trained crew and quality materials, we ensure that your guide rail project is completed on time and within budget. Contact us today to learn more!
We use cookies on our website to give you the most relevant experience by remembering your preferences and repeat visits. By clicking “Accept All”, you consent to the use of ALL the cookies. However, you may visit "Cookie Settings" to provide a controlled consent.
Cookie SettingsAccept All
Manage consent

This website uses cookies to improve your experience while you navigate through the website. Out of these, the cookies that are categorized as necessary are stored on your browser as they are essential for the working of basic functionalities of the website. We also use third-party cookies that help us analyze and understand how you use this website. These cookies will be stored in your browser only with your consent. You also have the option to opt-out of these cookies. But opting out of some of these cookies may affect your browsing experience.
Necessary Always Enabled
Necessary cookies are absolutely essential for the website to function properly. This category only includes cookies that ensures basic functionalities and security features of the website. These cookies do not store any personal information.
Non-necessary
Any cookies that may not be particularly necessary for the website to function and is used specifically to collect user personal data via analytics, ads, other embedded contents are termed as non-necessary cookies. It is mandatory to procure user consent prior to running these cookies on your website.
SAVE & ACCEPT